I was bored and decided to find something on On Demand to watch to pass the time. I came across Six Degrees of Separation and remember a lot of talk about it when it came out, afterall it Will Smith’s first big role. When I started the movie I was a little bored but as it went on I became more and more intrigued. I just knew immediately there was something up with Paul (Smith) who claimed to be Sindey Poitier’s son. 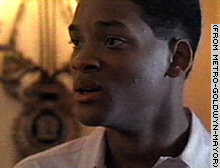 As you can guess I was sucked in minute by minute and was on the edge of my seat to find out how it ended. I can’t believe somehow this movie slipped through my fingers all these years. I’m not even sure how long it was because I was so enthralled the whole time. It flowed from scnene to scene as the characters unfolded this ongoing mistery.

The performances that really blew me away were Stockard Channing and Will Smith. It charmed me to see both of their characters develope and broaden throughout the story.